May be used with permission and full credit given to David Shelton. 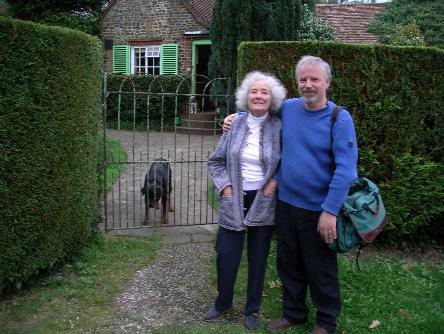 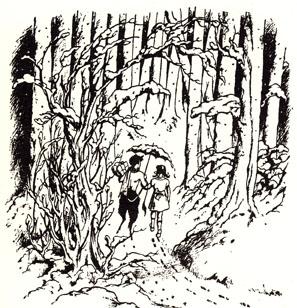 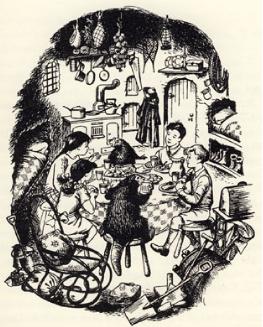 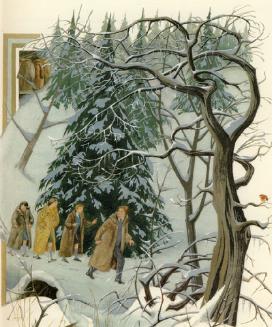 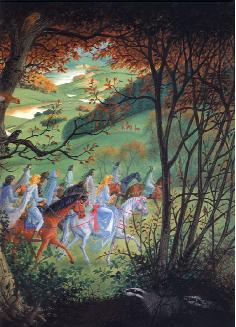 I first met Pauline Baynes when I was briefly commissioned to illustrate J R R Tolkien’s “Farmer Giles of Ham” about ten years ago. The project fell through, but it opened the door to one of the most unexpected and delightful experiences of my life; meeting and knowing Pauline Baynes. Pauline lived in what I can only describe as a magical cottage, in a serene sylvan setting in the beautiful Surrey countryside, a perfect place to create images for “Narnia” and “Middle Earth”. A bright, literate, lovely spark of a woman, she lived a strongly independent life with her two dogs, Lady and Bertha, and worked until the very last day of her life.

It doesn’t always go smoothly when one meets people whose work you admire, but we hit it off right away. I and my brother in law, David Shelton, the “pilot” on these annual visits, were completely charmed by her and by her fascinating environment as the cottage was filled with folk art and images by some very famous illustrators.

The original meeting with Pauline was a bit comical as I had her phone number but the wrong county code and kept getting a carpet store in Hastings. We were on a road trip and were constantly stopping to use a phone box, and I was getting very frustrated at not getting through. My dream of meeting her was not going to come true. I finally got the right number and we followed her directions; past Bird World, past great thicket, the blasted oak, the tall white tree etc, there was no name for her road if I recall. As soon we saw her cottage we knew we were in Narnia or as close as we would get.

Many people were of course fascinated by her connection with C S Lewis and Tolkien, or Ronald as she called him. It was more than a connection, it was a friendship born of Tolkien’s extremely high regard for her work. She and her husband Fritz often went on holiday with Ronald and Edith, and she admired Tolkien greatly. He wore, she said, “ …his erudition and religion lightly”.

I too was intrigued by this connection but much to Pauline’s delight, my main interest was asking her about her own work and of course comparing notes on an illustrative approach to “Farmer Giles”.

We visited many times after that, and on one occasion after a delicious meal with her at The Bluebell, the local pub, she mentioned that she had just about run out of her favorite illustration board. She had bought a stack of it as she said, “…in the middle ages…” and was faced with working on an inferior surface. Pauline painted in gauche for most of her 60 year career and what looked like firm pen work was in fact worked up with a brush. She habitually worked “size as”, as she felt she had to know what the art would look like when it was reproduced. At any rate, Dave and I volunteered to go to the London Graphics centre and buy a reasonable substitute board for her. I like to think it lasted up until the last brush stroke.

I sent her a silly illustration and a limerick after our first meeting which she really enjoyed, somehow it sums up the laughs and good times we had with our dear friend Pauline.

There was a young lad from Toronto

Who had to see Pauline B pronto !

He teamed with Dave

Those appalling young men from Toronto !

A Rememberance by Martin Springett

A Musical Tribiute to Pauline