Here I am working on a comic strip for Heavy Metal Magazine, circa 1980. I think it was called  “The Prisoner“. An odd little tale about a planet inhabited by Horse like beings called Equa who enjoyed putting on games rather like the Romans held in Rome at the height of the empire. Very jolly.

For those who are interested I am using the dreaded Rapidograph to create the line work.  This was a pen used by draftsmen when rendering architectural designs. Unlike a dip pen it had a straight unforgiving “nib“, great for fine detail, stippling etc, but it allowed for no thicks or thins when creating line work. The last image that I used this implement on was the cover for “The Summer Tree“, the subsequent covers in the trilogy were painted  in acrylics. Remember you read it here ! Very jolly.

These are the original sketches from "The Summer Tree" ( 1984 ) written by Guy Gavriel Kay. This drawing would have been sketch number 58 or thereabouts, the "search" for just the right look for this cover was rather tortuous.  Even the great Maurice Sendak says he has trouble with horses, so I don't feel too bad about my rather stretched Unicorn. I was stretched myself at this point trying to get to the place I felt captured the feeling of this lovely tale. One critic at the time had a problem with the cover; he said the finished painting looked too much like an old fashioned children's book. To me, that was high praise, I don't recall anyone being put off this novel because of that problem. I am gratified to have met many of Guy's fans who picked up "The Summer Tree" because of the cover. My own sister Isobel bought the book because she loved the look of the art, it wasn't until she was halfway through that she realised that I had created the cover illustration. Mind you, the publisher couldn't have printed my credit line any smaller if they'd tried. I think Isobel used a handy electron microscope to see it clearly.

This is the original layout for "The Darkest Road". It's actually a pencil drawing rendered to look rather like a  pen line drawing. This colour sketch gave me the confidence to go ahead and paint the image, even though a lot of the colour choices were abandoned once I started painting.

If you are interested in reading and seeing more about the creation of the covers for "The Fionavar Tapestry", click here.

This is a page from my sketch book for "WHO", a beautiful story written by Richard Thompson that was published by Orca Books in 1993. The sketches date from the Summer of 1992. On this page I am working out the scene in the story where Moon presents a mirror to the young owl that has been named after her. I've always liked this page, as it shows clearly the working out of  visual ideas, any of which could have worked in the finished book.  Check out the page for "WHO"  in Children's Books under the Art Galleries section, to see the finished result.

The Man Who Laughed at the Moon

This image was originally published in Heavy Metal Magazine in November 1980 as part of a story called "Awaken".

Welcome to the Springett Archive. To put this in perspective, all the work that is currently featured on the site dates from 1984 with the cover of “The Summer Tree” by Guy Gavriel Kay. That particular image was a turning point not only in terms of concept and execution but it also opened the door to publishers of fantasy books, especially in New York. This then lead to another world entirely, children’s picture books, which I am still immersed in.

The first piece I found while trolling through the terribly organised Spong ( my altered ego ) Archive was this pen and ink portrait of Rhassan Roland Kirk, one of the truly eccentric Jazz greats of the sixties and seventies. The year was 1967 and I was working in a record store in Victoria B C called “The Record Gallery”. If he felt you were not deserving of the music you were about to purchase, the owner of the store would refuse to sell it to you. Shades of “High Fidelity” here. I did this drawing as a very “cool” poster for the store. I was 19 and had been in Canada for less than two years.

In 1982 I illustrated the cover for Toronto heavy rock band, CONEY HATCH'S first album.  The group's name came from a notorious asylum for the insane in England called Colney Hatch. I had meetings with the band and we came up with this concept. I had been working for Heavy Metal Magazine, and this was the style I was using when creating the rather surreal comics I was into at the time.  I remember the bass player Andy Curran was also an ex brit, and we had a great time coming up with this concept. The album is still in print.

Around the same time I illustrated the inner sleeve for CIRCUS, an L P by ARGENT. The leader of the band was Rod Argent former keyboard player with The Zombie's. This was a cool 70's concept album, every song on the L P referred to life in the circus.  It was winter when I was working on this and I recall that the house I was living in in London was icy cold, as we couldn't afford to heat the place. This is the only image I have created wearing gloves.

While living in London In 1975 I was asked to illustrate the cover for IAN HUNTER'S  first solo album. Ian had been a member of Mott the Hoople and had had great success with a DAVID BOWIE song called, All The Young Dudes. Ian left the band in 1974 and subsequently recorded this album with Mick Ronson on guitar.

I got the gig because I had approached CBS records, now Sony, with a tape of the band I was in. They didn't care for the music, not commercial enough, but the art director Roslav Szybo, was taken with the poster I had created for the band. He then asked me to illustrate various L P covers, including an award winner for a Stravinsky album. Some of you will recognize the image on this cover, it's based on an M C Escher drawing. The art director was keen on using this along with Ian's signature dark glasses. It is still in print, and some folks in Europe consider this a classic album cover. I was recently contacted by a German music magazine to unlock some the odd visual mysteries in the cover. Why the baby in the cabbage? Who knows?

Recently discovered, MY FIRST PROFESSIONAL APPEARANCE IN PRINT, September 22nd, 1966.  I was living in Victoria B C, less than a year out of England when I was asked to provide illustrations for the University of Victoria's Martlet Magazine.

I was 18 and thrilled to see my work in print for the first time. I still get the same thrill, after all these years. 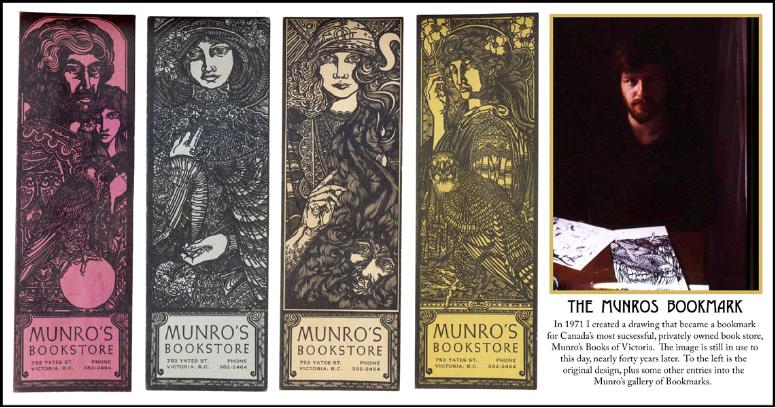 In 1971 I created a drawing that became a bookmark for Canada's most successful, privately owned book store, Munro's Books of Victoria. The image is still in use to this day, nearly forty years later. Above is the original design, plus some other entries into the Munro's gallery of Bookmarks.